I’m just back from a trip to the Lake District here in the UK. It was my 40th Birthday last week and I have been planning a short trip away to celebrate the significant day.

2 years ago when I quit drinking I couldn’t think about my 40th birthday without wanting to celebrate it with an insane amount of alcohol. I always thought I’d have either cracked the whole being sober thing or I’d be back drinking again by now.

Well, since I’m happy and sober I wanted to mark my 40th year by doing something I’d remember, an achievement of sorts. So I planned a trip to the beautiful Lake District to climb the Via Ferrata. I have no real climbing experience, but I have a head for heights and this is especially designed for the novice (ish).

Out of the twelve people who came to celebrate my birthday (mixture of friends and family) seven of us did the climb. It felt amazing, though scary at times. But doing it felt like such an achievement, like I was alive. I will never forget it. 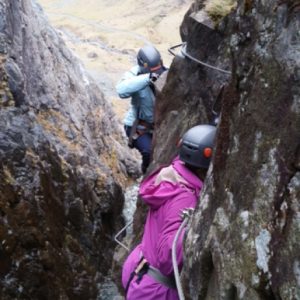 After the climb, most of us had a nap and then prepared to meet the rest of the group in a local pub nearby. I was a little worried that this part of the trip may have been a bit dull for me. Most of my friends are heavy drinkers (like I was). They all know I don’t drink anymore so I wasn’t worried about that but I’ll be honest I thought it might have been boring.

However, it was great! I used the time to properly catch up with them all. I didn’t care it was in a pub. It’s just an easy place to meet up I guess. As it was my birthday the attention was more on me and how I was and that was great! After a few hours we went for food and spent an age in the restaurant. (which is my favourite place to be). We chatted, caught up and laughed over old times.

I have made some memories this weekend which I will treasure forever. I was humbled by the number of friends who wanted to be there with me to celebrate my birthday. No one cared that I wasn’t drinking. I think a few people just never noticed too.

I can honestly say that if I was still drinking, this weekend would never have happened.

The very best bit was waking up this morning with a smile on my face. Happy to be alive while nearly everyone else was suffering from a few too many celebratory drinks!